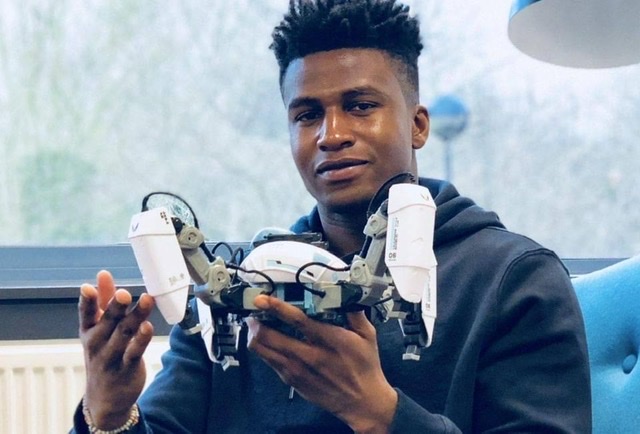 A 26-year-old Nigerian, credited for building the world’s first gaming robot, Silas Adekunle, has become the highest paid in the field of robotic engineering.
Adekunle achieved the feat after signing a new deal with the world’s reputable software manufacturers, Apple Inc.

The robotics engineer was also named as “Someone to Watch in 2018” by the Black Hedge Fund Group.
Adekunle is currently the founder and CEO of Reach Robotics, a company developing the world’s first gaming robots.

He also recently graduated with a first class degree and has four years’ background in robotics.

Born in Lagos, Adekunle studied in Nigeria before relocating to the United Kingdom as a teenager.

After completing his secondary school education, he proceeded to the University of the West of England where he graduated with a first class degree in Robotics.
In 2013, he founded Reach Robotics and developed a lot of experience on robotics within a space of four years.

Adekunle was also a team leader of Robotics In Schools programme, a programme which encourages and pays attention to students in Science, Technology, Engineering and Mathematics (STEM)

KULU TEMPER BY DIVINITY DIVINE MP3 AUDIO DOWNLOAD Kulu Temper is the song of the moment! Nigerians, Africans and countries