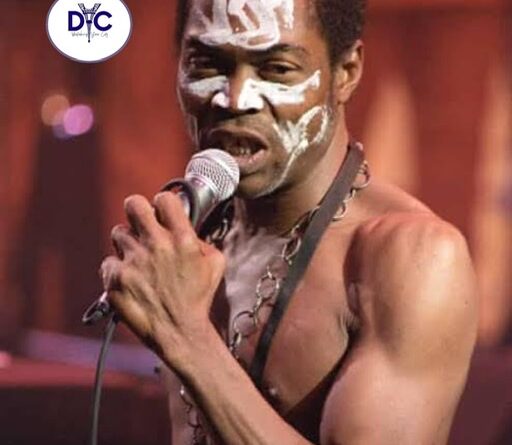 25 years after his demise, too sad, most of the things he sang about still dey paparampa!

The great philosopher Fela’s music is not limited to:

TEN (10) OF HIS GREAT EVERGREEN MUSIC

This song describes the problems and sufferings that abound in Africa as a continent, despite its rich resources. He condemns the ‘big man’ and ‘white man’ for taking up everything and leaving nothing but suffer and anguish for the average African man.

The economic disparity between Africa and other continents is displayed in the fact that basic resources like food, water, electricity and the likes are still unavailable to a large number of people living in this part of the world.

Fela describes the life of the average Nigerian who is constantly suffering, but smiling through the pain, believing in the rewards that await them in the afterlife due to the teachings of religious leaders, who themselves live the most lavish lives, enjoying the so-called earthly pleasures. He warns people to open their eyes to this injustice and stop being blind followers of religion.

Fela uses the abbreviation of International Telephone & Telegraph (IT&T) to directly attacked the company’s CEO, Moshood Abiola, and other politicians like Obasanjo who continuously betrayed the continent and their fellow Africans in their bid to get rich off the white man’s wealth.

This song is relevant in today’s world as seen in the violence that goes on in the Niger Delta as a result of the insufficient resources and recognition that the region is given despite being the major supplier of oil and the bulk of the county’s wealth.
Politicians are still looting, extorting and selling out their people in their bid to get richer.

This song, like many others, talks about how the government steals and loots the country’s resources on a daily and goes unpunished, while the petty thief gets killed and burned on a daily basis. For him, the people in authority are just civilized thieves who get away with their crimes because of their position.

Our government still steals from us and feeds us lies and we let them get away with it. The petty thief gets thrown in jail while the political robbers remain scot free and given liberty to continue looting.

This song also condemns politicians. Here, he speaks about the corruption that abounds in religion, especially by hypocritical leaders like Obasanjo and Yar’adua.

Today, we still see a great deal of corruption and hypocrisy in the guise of leadership and religion. Our leaders are still stealing from us, but yet are the quickest to attend church programs and quote bible verses.

This song talks about the many unusual happenings in the country and how the citizens all behave like crazy people. It touches political, economic, social matters and talks about the silence of the Nigeria people against government oppression and brutality while speaking up against apathy in foreign nations like South Africa. According to him, these could only happen in a crazy world.

This song remains relevant today as the same hypocrisy and silence in the face of government injustice, injustice is still the order of the day in our beloved country and continent as a whole.

In this song, Fela warns about the dangers of skin bleaching that was becoming a trend for women. He lists the many unappealing aspects of bleaching and tells women that they were better off leaving their skin in its natural form.

Today, bleaching has become even more rampant than in the times of Fela. According to the World Health Organization, Nigeria has the highest number of women in the world who use skin-lightening products.

This song highlights the fact that the white man seems to be living our lives for us, while they make their own decisions based on their culture and tradition. The white man, instead of condemning the bad leadership that goes on here, overlooks them while doing the exact opposite in their own countries.
He condemns the so-called democracy and begs Africans to open their eyes and realize that they are being misled and stolen from.

Today, instead of drawing away from the chains of colonialism, we still rely on foreign countries to help us make some of our major decisions and try to imitate every aspect of their lives, forgetting our cultures and traditions in the process.

He speaks about the fact that Africans have colonial mentality and still live in the past despite having gained independence. They embrace everything foreign and believe theirs to be inferior, from basic things like food and clothes down to their names and religious practices.

This song is still very relevant today, as Africans in general would rather purchase foreign made products and would use foreign names instead of their traditional ones.

This song talks about the confusion that abides in the country and the lack or proper organisation. His tone here sounds sadder and more resigned to the fact that things might never get better for the country. He highlights all the problems he had mentioned in his earlier songs and says that nothing has changed and wonders at the insanity of things.

Fela has done his own part and gone to great beyond. Fela’s ITT album says *”water plenty for Africa but ordinary water for man to drink nko? E no dey! 1990 dem go give us water”

Where are we now?